An article co-authored by Communication, Brain and Behavior (CBB) Lab faculty leader Chris Cascio in Social Cognitive and Affective Neuroscience was one of the journal’s most downloaded of 2020.

The article, titled “Narcissists’ social pain only seen in the brain”, has been downloaded over 5,800 times since being published.

Narcissism is a complex phenomenon, involving a level of defensive self-enhancement. Narcissists have avoidant attachment styles, maintain distance in relationships and claim not to need others. However, they are especially sensitive to others’ evaluations, needing positive reflected appraisals to maintain their inflated self-views, and showing extreme responses (e.g. aggression) when rejected. The current study tested the hypothesis that narcissists also show hypersensitivity in brain systems associated with distress during exclusion. We measured individual differences in narcissism (Narcissistic Personality Inventory) and monitored neural responses to social exclusion (Cyberball). Narcissism was significantly associated with activity in an a priori anatomically defined social pain network (anterior insula, dorsal anterior cingulate cortex and subgenual anterior cingulate cortex) during social exclusion. Results suggest hypersensitivity to exclusion in narcissists may be a function of hypersensitivity in brain systems associated with distress, and suggests a potential pathway that connects narcissism to negative consequences for longer-term physical and mental health—findings not apparent with self-report alone. 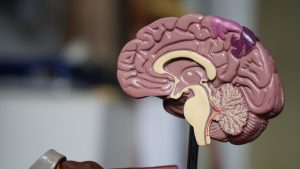