Researchers in the Social Media and Democracy (SMAD) group had their paper, “Whose Lives Matter? Mass Shootings and Social Media Discourses of Sympathy and Policy, 2012-2014,” published in the Journal of Computer-Mediated Communication, the highest ranked journal in the field of communications. The study, led by doctoral candidate Yini Zhang, focuses on the outpouring of sympathy in response to mass shootings and the subsequent contestation over gun policy on Twitter from 2012 to 2014 and relates these discourses to features of mass shooting events. The authors use two approaches to Twitter text analysis— hashtag grouping and machine learning—to triangulate an understanding of intensity and duration of “thoughts and prayers,” gun control, and gun rights discourses. Using these data, the authors conducted parallel time series analyses to predict their temporal patterns in response to specific features of mass shootings. Their analyses revealed that while the total number of victims and child deaths consistently predicted public grieving and calls for gun control, public shootings consistently predicted the defense of gun rights. Further, the race of victims and perpetrators affected the levels of public mourning and policy debates, with the loss of black lives and the violence inflicted by white shooters generating less sympathy or policy discourses.

These findings have implications for debates over gun policy. Following the spate of deadly mass shootings in the US in early August, Zhang appeared on Wisconsin Public Television’s Here and Now. She offered insights from this study regarding public response on Twitter after mass shootings, which she explained might contribute to the gun policy impasse. As gun rights discourse on social media persisted more than gun control discourse, and sympathy discourse had an ephemeral life, the signal sent to both journalists and politicians may be that the passion of gun rights supporters merits more attention and action than short-lived appeals for gun control.  The team is conducting follow up studies to examine these and other questions.

The research team made up of faculty and graduate students from four UW departments. In addition to Yini Zhang, the other authors on the project include Dhavan Shah, Jordan Foley, Aman Abhishek, Josephine Lukito, Jiyoun Suk, Sang Jung Kim, Zhongkai Sun, Jon Pevehouse, and Christine Garlough. The articles can be downloaded here.

The articles can be downloaded here 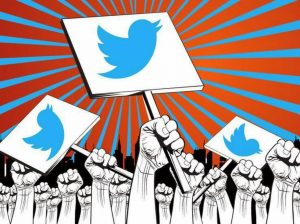