A new study by Social Media and Democracy group researchers (link to submission) examines how Trump’s populist communication style, as manifest in his rhetorical and non-verbal approach to Presidential debates, drove reactions on social media. Using detailed verbal, tonal, and visual coding of the first U.S. presidential debate of 2016 between Donald Trump and Hillary Clinton to show how Trump’s transgressive style — i.e., violating normative boundaries, particularly those related to protocol and politeness, and openly displaying anger — can be operationalized from a communication standpoint and related to the “real-time” Twitter responses during the debate.  Our findings support the view that Trump’s norm-violating transgressive style, a type of populist political performance, resonated with viewers of the debate who reaction via “second screening.” 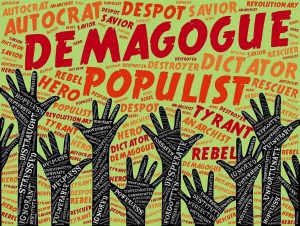